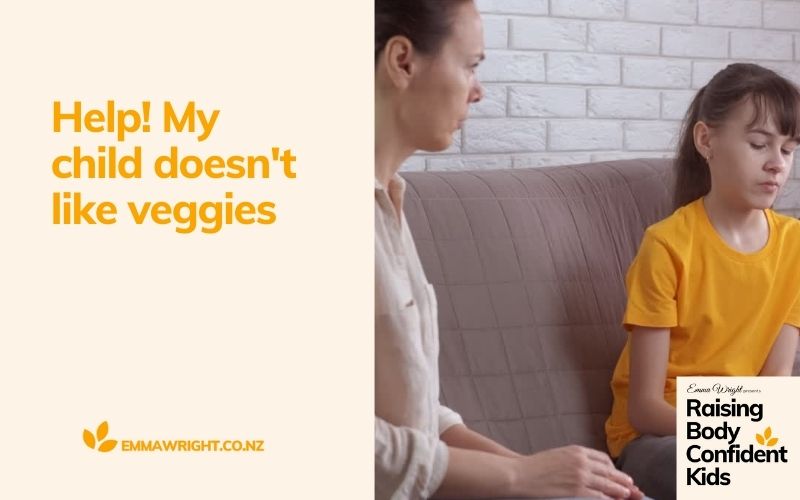 Kids need 5 + a day!  Chances are, you’ve heard that phrase a million times.

Every parent knows that kids need help from us to eat veggies and that most kids take a while to get used to them. We’re taught to use methods like:

We’ve all had the memo that veggies are a super important part of a child’s long term health.

That’s why parents dedicate so much time getting their kids to eat their greens. We want our toddlers to teens to eat them without fuss.

Parents often put the veg on their child’s plate, tell them it’s a non negotiable and make a point of making sure they know how good it is for them.

But often (it’s seriously common, folks), kids have no interest. They don’t like the flavours. They fight us. They whinge, whine or simply refuse. And where you’ve had some joy with a star chart, or the promise of ice-cream, now that they’re older, you can’t make them and they know it. Or they’ve been uninterested from the get go and you’re getting sick of the battle.

Veggies are super important, you get it, even though you never serve green beans because you were forced to eat them as a kid and you just can’t go there.

So many of us get that the way we are approaching veggies isn’t working, and yet on-we-press…

There’s a big difference between making kids eat veggies on your schedule and encouraging them to do so in their own time. And according to researcher Ellyn Satter (and a growing number of paediatric dieticians), that distinction is critical.

Using the division of responsibility in feeding model, Satter can tell us that allowing them to discover what they like, in their own good time, leads to kids that grow into adults who eat more veggies, more often than kids who are rewarded, praised and cajoled into eating them as kids, do.

Eating greens shouldn’t be done begrudgingly or on-demand. It needs to be self-inspired. And its rewards play out long-term–not just in the heat-of-the-dinnertime moment.

Here are 3 step-by-step ways to inspire lifelong vegetable eating in your kids by starting with the premise that they can figure out what’s best for their body better than you can.

Imagine your 11 year old at the table. You have guests. There are four dishes to choose from. Your child only likes one of them.

One of the guests might say, “Take some carrots. You’ve gotta eat your veggies, if you want to be healthy.”

Veggies are nutritious. They are part of a balanced diet. The problem is, many kids don’t like the taste of them, and when eaten to oblige someone else, they are less likely to eat them when they’re older, than if they’re eating them because they like them.

Your child was minding their own business, serving themselves what seemed good to them, and suddenly they’re asked to take the food that someone else wants them to eat. Why?

According to Satter, this child doesn’t learn to like veggies. They just learn that eating veggies feels bad.

Plus, as anyone with a tween can tell you, once our kids reach a certain age, we no longer have control over what they eat, so if they’ve been encouraged to eat to please us, they’ll stop doing that every chance they get. In other words, kids who are rewarded and praised for eating a ‘healthy’ diet as kids, but don’t really like what they are eating, will be far more likely to eat the foods they like to excess when we’re not around to control them.

And here’s the irony in all this! Adults aren’t expected to eat foods they don’t like.

Imagine being at a dinner party and someone insists you eat the asparagus even though it makes you gag. It’s good for you, the host says.

Sure, it’s full of nutrition. But wouldn’t your immediate reaction be annoyance, anger, and less desire to ever eat with those friends again?

Attempting to ‘get’ our kids to eat a certain way builds resentment. It can make eating downright unpleasant. It doesn’t teach moderation or a love of vegetables; it stifles them.

Adults want to be free to eat as much of what satisfies them at each meal. The same applies to kids.

Children can make a big scene about food, can’t they? Toddlers can have tantrums over their sandwiches being cut the wrong way. Tweens can be rude and grumpy. Entitled kids are demanding kids, and we don’t want to raise an eater who gives us the runaround.

It can be intimidating, and can turn even the loveliest meal into a hellhole for everyone.

But, please, allowing your child to serve themselves from the foods you’ve prepared, doesn’t mean you need to cook them exactly what they want, at each meal. Please don’t give in to this. Children need to learn that not every meal will be their favourite, and it’s not your job to bend to every desire.

Satter suggests we can make this work by making sure there is always at least one dish on the table you know your child likes. It might be bread or pasta or rice. That way they will feel comfortable at the table, even if the other dishes challenge them.

2. Emphasise: their body, their choice

Imagine your child who doesn’t like veggies (or fruit or any type of food) eating a meal at preschool or school.  Instead of stating, “You have to eat what they provide,” or “The teacher has said you have to eat your fruit first,” encourage your child to say: “Only I know what tastes good to my body, so I’m going to listen to it.”

We can encourage kids, through reinforcing the your-body, your-rules idiom, to respect their own unique needs and establish limits with those around them.

When doing this, we can remind our kids that they can always be courteous, “Can you please let me decide what is right for my body?”

The “right for my body” part of this phrase is key–it reminds everyone that our children have the right to decide what they eat, and how much.

Let’s look at some phrases we can teach our children, and some for us too, that can help them and us in this process:

– That is not to my taste, thank you very much

– I’ve had enough, thank you

– I don’t like to eat my fruit first, can you please let me listen to what is best for my body

– Oh, that’s a bummer you don’t like most of the things that are on the table, that will happen sometimes

– You might be annoyed, I get it, but this is all there is for dinner

– We’ll have potatoes tomorrow, but we’re not having them today

– What do you like most about the corn, is it the flavour or texture?

– Are you satisfied, or do you want more?

Even ‘no veggies’ can be okay

Here’s the cold, hard truth: If your child determines how many veggies they eat, it might take weeks, months, or even years before they willingly eat them.

But their health, you might worry. Won’t they get sick?

Probably not. Some kids don’t eat veggies until they are teens and they are perfectly fine. Continued, no-pressure exposure to veggies that gives kids opportunities to try, practice being brave, and learning to enjoy new tastes is the best way to get kids to eat more veg in the long run. These things signal that they should respect their body, rather than prioritise what others tell them is right for their body.

Kids also eat more nutritionally weak foods, when they anticipate ‘having’ to eat veggies and not being ‘allowed’ enough of what they like. They are more likely to eat the things we’ve deemed ‘bad’ for a sense of control they have over what goes in their mouth. I go into this in more depth in this free mini-series.

If your child is getting pressure from other family members or care providers to eat a certain way, you can always say:

“They can trust their body! I don’t know what they will choose to eat today, but they can let you know when they’ve had enough.”

Even better? Encourage your child to speak for themselves!

Gradually, exposure to veggies without having to eat them, will probably lead to them trying more things and start to like them.That way you’ll know they’ll eat them even if you’re not there to make sure! Even if it takes a long time, it’s okay.

We can set the scene for expanding our horizons, even while our child refuses greens.

When a child says ‘yuck, that’s disgusting’ you can remind them that they probably won’t always think that, so they can keep their opinion to themselves.

You can get your child to help pass around dishes to others at the table. It’s a great lesson in courtesy and awareness of others.

You can also encourage a child by telling them they can be proud of themselves for trying new things. I’d steer away from praise, or making a big fuss when they do, as that can backfire (more on why that is here).

While eating vegetables needs to be a child’s choice, we parents can keep up the encouragement. For instance:

– I see your plate is empty. Is your body telling you it’s had enough?

– What’s more important to you, the texture, the smell, the colour or the taste?

– Your body will always tell you what is good for you.

Soon enough, eating what suits their body will come naturally. And the moment a child willingly eats their veggies will be far more satisfying for you and them. You’ll be able to feel authentically pleased for them, rather than worried about what happens when you’re not in the room.

The earlier kids learn to trust their body and that you respect the decisions they make about what they eat, the better the relationship they will have with food and their body, and the higher the chance of them eating a nutritious diet.

It can be hard to stray from the cultural norm that says we can’t trust kids to make their own decisions about veggies. Indeed, it can be a controversial subject. But if ‘normal food rules’ worked, we wouldn’t have the fighting, the resistance and our own fears to deal with.