When someone you love keeps going back to the fridge, remember this… 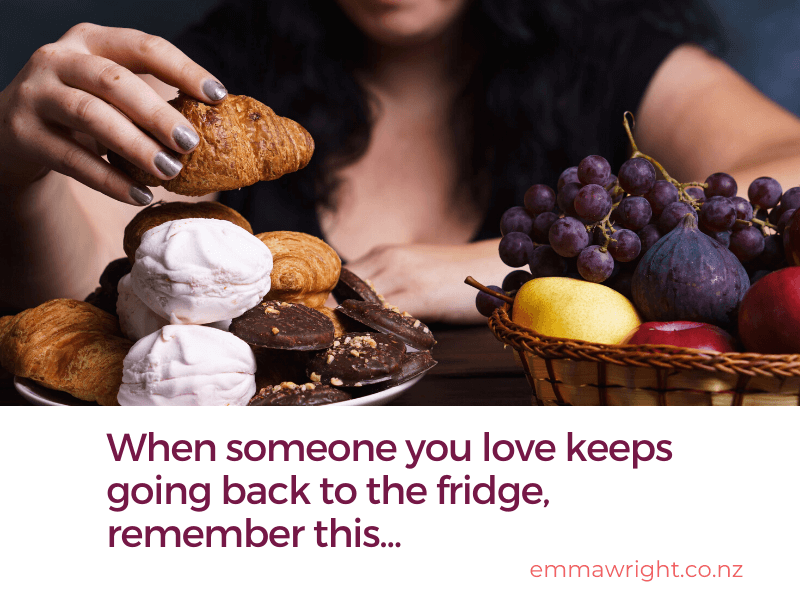 I don’t know how many times I’ve been talking with parents about what to do when kids keep going back to the fridge or sneaking food from the panty.

At some point almost all parents say – well, I know how they feel, I can’t stop myself! I get it. It’s super common in this world of food rules.

Most articles I’ve read suggest that binge eating or emotional eating can be controlled simply by controlling what we eat. They might tell us to restrict a certain ingredient or food group claiming that once that particular devil is out of your system, you’ll notice calm, good feeling and sanity descend upon your now delightfully skinny body and the fridge will never be a problem again.

Or perhaps they’ll offer ‘substitute’ activities. Feeling the need to eat something you don’t want to? Have a bath. Go for a walk. Distract yourself in some way.

While these ideas are well-meaning, at best, they don’t work. I can’t tell you how many baths I’ve taken only to eventually go back to the fridge anyway, feeling even more shit about myself than I did to begin with.

Plus, they totally don’t deal with those times we’re sitting in a meeting or waiting for a lecture to start, or catching a plane (remember when we used to catch planes?). Very hard to take a bath, then. But what about breathing. That’s right. They do often recommend breathing. The thing with breathing that they fail to mention is that it often makes you feel worse. Being in your body (which is the idea of noticing your breath) when your body is full of uncomfortable thoughts and feels that a trip to the fridge is bound to soothe, only makes us feel worse, damnit. Not better. Which makes the desire to eat even stronger. You can get the problem here, right?

I’m a big advocate of breathing as it happens. I’m just not an advocate for trying to deny our bodies signals to take care of itself, like eat, for instance, and try and focus on something else instead, but we’ll get back to that in a moment.

At worst, these do-something-else-rather-than-eat suggestions, cause damage. A child who starts to believe they shouldn’t be eating as much as they are, or that what they want to eat is bad/unhealthy for them, is more than likely to internalize a shitty narrative about themselves that isn’t easy or quick to shift. Given 80% of women have an I-hate-my-body moment every single day, there are a lot of people who get what I’m saying. Feelings of self-loathing and disgust, insecurity about our bodies, minds dominated by what we should and shouldn’t be eating. These are some of the hardly-ever-mentioned side effects of believing we shouldn’t be going back to the fridge when our bodies want us to go there.

Okay, so it’s not just about stopping ourselves going to the fridge. That shitty internal narrative so many of us have is a side effect of restricting what we eat (at any point) based on a mental position about what is okay and not okay, rather than follow the cues of our body. It’s weird isn’t it, that suggesting we listen to our bodies that are fitted with a superb system for letting us know how much and of what we should eat, comes across as so radical. But that’s where we’ve got to with body/food screwiness.

The truly sad thing is that the ‘just take a bath’ or ‘cut out such and such’ brigades often talk about how free and easy breazy we’ll be around food once we’ve got our cravings under control. The myth that gets bandied about is this – once we eat a certain way, we’ll look a certain way and hey presto we’ll feel a certain way. Doesn’t work. Never has. Never will.

It doesn’t work because it goes against our biology. We are designed to enjoy an abundance of food and to get hyper-focused on it when there is a famine. Our bodies go into the famine response as soon as we restrict food – calories, enjoyment, satisfaction, pleasure. Yep, that’s right. When we even ‘consider’ going on a diet, our bodies’ metabolism changes and makes us want all the foods we’re about to not be allowed. It’s a pretty amazing system when you think about it.

If you or someone you love can’t stop from going to the fridge even when you/they don’t want to, the first step is to learn a new way of approaching food and bodies. It’s a way that allows us to trust ourselves. It takes all the restrictions we’ve been told are good for us but don’t work, bundles them up, and knocks them for six. When they’re gone, true peace and freedom arise. A place where you can go about your day hardly thinking about what you’ll be eating.

But beware, this isn’t a trick-yourself-into-weight-loss by pretending you’re not on a diet thing. This is actually making peace with food and allowing your body’s weight to fall where it does. The joy you hear from folks who do this is remarkable. It’s uncommon. It’s radical. If you’d like to go deeper into this stuff for yourself or a loved one, grab a 15 min chat with me and we can talk about how to get you what you want.

Sign up below for the free Body-Image Toolkit + weeklyish coaching tips to stop shitty internal narratives – for yourself & your kids. 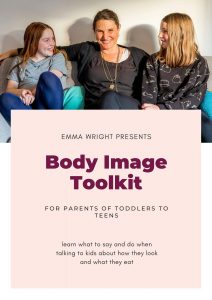