What to say when a kid says I’m fat 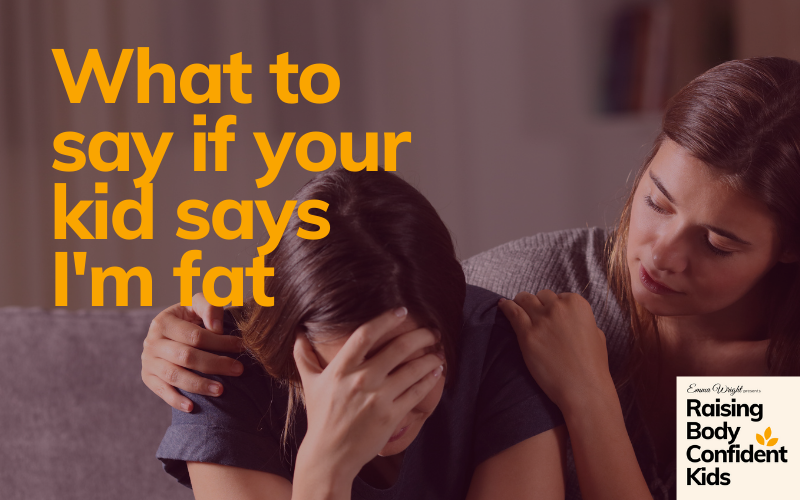 The thing about kids saying they hate their bodies that we often fail to recognise…it’s not their size they’re talking about. It’s their sense of belonging.

It’s knowing that being fat comes with bullying, stigma and shame,

that triggers a feeling they don’t belong in their friend group or family,

that brings them pain.

Every time I tell a room of parents, “when your child tells you they’re Fat (like that’s a terrible thing to be),

Because it’s the answer everyone’s been giving.

And we give it…

Because we know how awful it is to hate our own bodies,

and we want to protect our kids from that pain.

… and we want to protect our children from that pain too.

Of course we do – we love them.

But telling them they’re “not!!” does three things…

It tells them YOU think being fat is TERRIBLE and sends the message that if they end up being (or already are) fat, you won’t like it, you won’t love them quite so much – I mean look how horrified you are about it…

Add to all that, fear of our kid gaining weight is what drives to tell them they’re not.

Have a thin child or you’re a bad parent.

So we tell them they’re “not” to try and protect them from the pain of not fitting in,

And our own pain of failing at our parenting role…

But telling them they’re not is when the cycle begins.

it’s when they stop telling us how they feel,

it’s when they get how even their parents won’t like them if they get fat (or already are),

it’s when they feel like they don’t have a choice but to try and fix the body they have,

because belonging in our world depends on it.

And then it might just be a matter of time…

before they start really hating their body.…

A child feeling isolated/weird/shameful is the almost certain outcomes of telling them they ‘are not fat’.

So what do we say instead?

Try out: oooh, that sucks to feel bad in your body. I’m sorry you’re feeling like that.

Add in some normalising: you know, weird as it sounds, humans have a vast track record of being mean to each other about how we look. I means most of us end up not liking our bodies from time to time. For me I always felt embarrassed by my….

Then – and this is the important bit – tell them you believe they’ll figure this out. You’re there to help, but you know they can do hard things. They can handle painful experiences. In other words, empower them.

Is body acceptance and body confidence for your family something you’re keen to work on? Are you willing to let go of health and wellness ideas that cause harm, to get to the other side? If so, I hope you check out the Raising Body Confident Kids parenting course.

Do your kids ‘sneak food’ and drive you nuts?” Being a leader for your family’s & community’s health & wellbeing