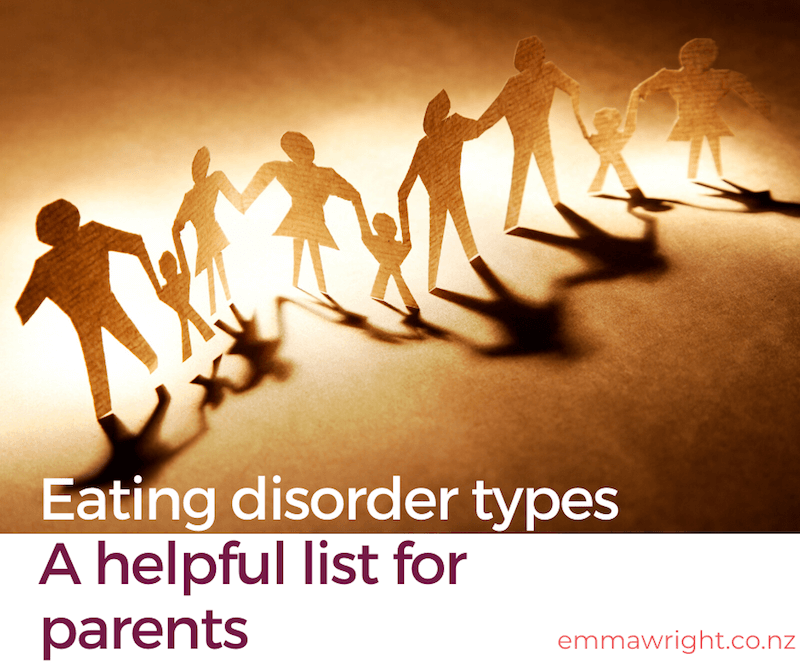 Most people I talk to have heard of bulimia and anorexia. That’s a great thing, given eating disorder prevalence has doubled globally since 2000. What’s not so great is that many parents I talk to have only heard of the ‘top two’. On top of that, very few know that eating disorders don’t discriminate between gender, colour, age, socio-economic status or size – almost any living person can get an eating disorder. You can read more about signs to look for here.

What’s more, very few know the different types of eating disorders that exist. It’s Eating Disorder Awareness week, so I’m out to help change that by sharing this list.

Anorexia is an emotional disorder characterized by an obsessive desire to lose weight by refusing to eat. Please note that this definition does not include a size criteria.

Many experts have moved away from anorexia being defined by a BMI or fat content measure. That’s because it is possible to die from starvation at a high BMI. I know of a mother who took her larger-bodied daughter to an Emergency Room because her daughter had collapsed. The mother told the attending staff that her daughter had been starving herself. The response she got was ‘Good on her!’ The mother stood up for her daughter and demanded someone to take the condition seriously. Her daughter was in organ failure, due to starvation. The mother knowing that size had nothing to do with her daughter’s eating disorder saved her life.

If you suspect your child has anorexia even if they don’t ‘look’ emaciated, please keep seeking help until you find someone who will take you seriously (please contact me if you need help to find someone in your area).

An emotional disorder characterized by distorted body image and an obsessive desire to lose weight, in which bouts of extreme overeating are followed by fasting or self-induced vomiting, purging or exercise. Some professionals will diagnose ‘exercise bulimia’ when an unhealthy relationship with exercise developed in order to compensate for eating.

Once again, bulimia can present in people of all ages, sizes, genders, ethnicities and abilities.

I was once told by a family member that I wasn’t ‘really sick’, like a friend’s daughter who had anorexia. It’s true that anorexia has a higher mortality rate than bulimia, but bulimia is not far behind. If your child has bulimia, please understand it is a mental illness that can be life-threatening.

An eating disorder characterized by periods of extreme overeating, but not followed by purging behaviors. If your child appears to be ‘addicted’ to food and cannot stop eating, they may be experiencing binge eating disorder and will need professional help.

Sometimes an eating disorder does not fit the exact clinical criteria for anorexia or bulimia.

Other Specified Feeding or Eating Disorders (OSFED) was previously known as Eating Disorder Not Otherwise Specified (EDNOS) in past editions of the Diagnostic and Statistical Manual. Despite being considered a ‘catch-all’ classification that was sometimes denied insurance coverage for treatment as it was seen as less serious, OSFED/EDNOS is a serious, life-threatening, and treatable eating disorder.

Avoidant Restrictive Food Intake Disorder used to be referred to as “Selective Eating Disorder.” ARFID can seem similar to anorexia because both involve severe restricting of food, but unlike anorexia, ARFID does not involve fear of fatness or body image concerns.

Lots of kids go through phases of selective eating, however, a person with ARFID does not consume enough calories to grow and develop properly. In kids, this can result in slow weight gain and vertical growth.

Many professionals believe there is a spectrum from selective eating to AFRID, which means your child may not meet the clinical criteria for AFRID, but may benefit from some of the methods in treating it.

You can read more here.

If you suspect one of the above in your child and would like to go forward with calm and confidence, you need a plan.

In order to school yourself up to get the very best possible help (know what questions to ask, understand the different approaches, be confident in your support) here’s what I suggest:

*If you suspect your child has an eating disorder, it’s important to seek professional care from someone who treats eating disorders in people of all sizes, shapes, ages and ethnicities. Email me here if you’d like a list of professionals to contact near you.