But what about sugar addiction? 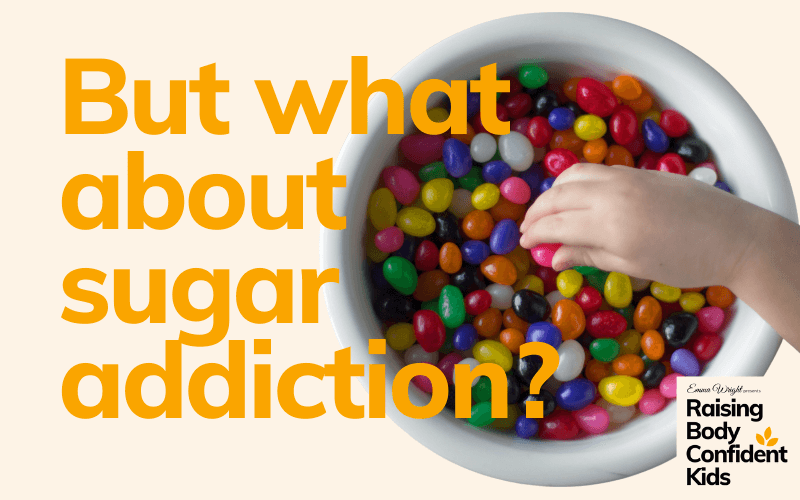 I have yet to speak at a Raising Body Confident Kids  event where I’m not asked by at least a handful of parents: “What should I do about sugar?”

I’m sure you know the themes…

…my child is on the bigger end of the size bell curve, how do I stop them eating so much sugar?

…how do I stop them stealing and sneaking and eating it in secret?

…If I let my kid eat all the sugar they wanted, they’d eat themselves into oblivion and I can’t be everywhere so how do I stop them when I’m not around?

Firstly, I get it. My kids love sweet foods — and it’s been the single hardest area of body confidence I’ve had to rewire my brain about — the cultural conversation we have about sugar runs deep. Plus — almost all the health and wellness info out in the internet-o-sphere implies sugar is dangerous, addictive, disease-causing and should, therefore, be heavily restricted.

And it’s available everywhere, isn’t it? It feels like you can hardly go five minutes without seeing some kid-enticing sweet thing winking at them — begging them to ask you if ‘they can have one, please?’ Hearing me?

Not to mention, all the intense judgment so many of us feel from other well-meaning mothers about what we should and shouldn’t feed our kids. Ask any mother if they’ve felt judged about their kid’s diet and heads nod vigorously.

And of all the things judged, everyone has an opinion about sugar.

So if sugar’s driving you cray-cray, please don’t be beat yourself up. You’re human and you care about your kid.

Given all this, the question then, really, becomes:  Are our kids’ sugar addicts or is something else going on?

To answer this, I’m going to tell you a story. This story changed everything for me. It helped me see that we’ve got off course with sugar, but that we can get back on. That it’s possible for our kids to have a healthy relationship with it. One where they eat it, but not to the point of feeling sick or hiding, or sneaking behind our backs feeling ashamed of themselves, yet unable to stop. I was like that when I was a kid. I ate sweets bought with money stolen from my mothers wallet, under the covers of my bed, so full of shame I could hardly stand it.

Yet today I eat sweet foods, love them, but actually not that many. Or I should say, not nearly as much sweet food as I used to eat when I was trying to restrict it, avoid it and eat less of it. I find sweets get cloying and sickly pretty fast. Sweet things can sit in the cupboard and I forget they are there. But when I have the urge for something sweet, there is nothing on this earth that satisfies that urge so fully and completely as a little bit of sweetness. And then it’s gone. This is what I want for your kids. It’s healthy.

But I digress. Back to the story.

There was once a researcher who wanted to understand the impact of sugar on kids. So he set up two kiddy parties. One was full of sweet ‘party’ food. One had not a single refined sugar bite. The mothers were asked to assess their kid’s emotions, mood, activity level, etc when they got home after their party.

And as you would expect, the kids that were at the sugar party were considered ‘high’ by their parents upon arrival home. They were emotional, hyperactive, hard to control, hard to get to sleep.

The ones at the sugar-free party were darlings. Calm, considered, easy to get to sleep.

The researcher was shocked at how consistent the results were, so repeated them again and again.

Here’s the interesting bit, please sit up and listen — he didn’t tell the parents he switched parties. The parents who believed their kids were at a non-sugar party, had, in fact, sent them to a party rich in refined white sugar. And vice versa.

This led the researcher to suggest that our cultural beliefs about sugar are far more ‘real’ to us than the actual physical effect of sugar itself. Our beliefs are so entrenched, they literally colour what we observe around us.

And this research was conducted before the study about sugar being ‘addictive’ came out. The one where it showed that sugar lights up the same area in the brain as cocaine and heroin. Pretty scary stuff. That fact was grabbed by many health and wellness experts who wrote about it and the terror started spreading. It played so neatly into our already-there cultural beliefs about sugar, the idea took hold like wildfire.

Unfortunately, what so many experts failed to explain, is that while it is indeed true that hard drugs and sugar light up the same part of the brain, so do hugs and small puppies and smelling flowers and getting a compliment and basically anything that brings us, humans, pleasure.

The other facts that failed to garner as much attention are…

…if a child eats an apple and a candy bar, it is impossible to tell which carbohydrate molecules in their brain come from the candy or the apple….

But what about, the undeniable fact that so many of us FEEL addicted to sugar (raises hand. I was so thoroughly out of control around sugar a logical leap to addiction seemed totally, well, logical).

Turn out though, just because we ‘feel’ addicted, doesn’t mean we are PHYSICALLY addicted.

Let’s look. A substance we are physically addicted to is dangerous and potentially life-threatening to withdraw from. Alcohol withdraw can kill you. Heroin is a horrendous ordeal. We don’t get life-threatening symptoms when we stop eating sugar. We might get a headache and feel lethargic for a few days. That’s it.

Plus, we need glucose to survive. Glucose is the ONLY form of energy the brain uses — so it’s in our best interest to enjoy foods that give us that energy. So you could argue that we are addicted to sugar, but it would have to go into the same bag as water and air and human connection. Not such a big deal.

You’re probably saying, but Emma, refined sugar isn’t the only source of glucose. And you’d be right. None of this is to say refined sugar is the only form of glucose available to us (complex carbs get turned into sugar in our system). And it’s been shown that eating a diet with a high proportion of white sugar can result in long term health issues.

But none of that means refined sugar is addictive nor necessarily bad for us when it’s eaten as part of a varied diet.

The question then becomes, how do we help our kids become ‘healthy’ sugar eaters. How do we raise them to love it, respect it, eat it without guilt or shame or to the point that it makes them feel sick?

How do we teach them to be one of those folks who just don’t think about it that much, have some, can leave what they don’t care for and just not be that bothered by the whole thing? Kind of like how I’d describe myself these days. Oh the freedom!!

The answer lies in two places.

One. Allow your kids to eat as much as they want

I feel a collective horror at this. But hear me out.

Restriction has been shown to be the number one cause of binge eating. Binge eating is not ‘caused’ by any addictive qualities in any foods, it’s caused by our body sending signals that it wants something that it has been denied, so it ‘gasps’ for it when it becomes available.

To get an idea of how this feels, just hold your breath for a few minutes. Notices how when air becomes available, your body ‘binges’ on it for a while. You need way more than you do normally. This is the same process that happens with bingeing on food. It’s not the availability of air that causes you to binge, it’s the initial restriction of it.

Not restricting their intake doesn’t mean you give them unlimited access and let them eat sugar from dawn ‘til dusk. Nope. That wouldn’t help them learn to eat a varied diet.

If we’re not restricting and we’re not allowing carte blanch, what should we do?

Instead of restricting — you’re only allowed three of those — when sugar is on offer, allow them as much as they like at the times when they can have it. Milk and cookies for afternoon tea a few times a week. Birthday parties.

But when it’s not on offer, it’s not on offer. A simple no, we’re not having that right now is sufficient. No, that’s not breakfast food. No, we’ll have cookies tomorrow for afternoon tea, today its toast. Have as much toast as you like.

This is a nuanced concept, that will require far more insight and understanding than a simple article can give you, but at the end, I’ll let you know where you can find out more.

And, letting go of restriction, leads right into the hands of point number two.

This method of feeding does away with policing what goes in their mouth — and helps kids be responsible for what they eat. And, it teaches you to be entirely responsible for which foods are provided. Sweets don’t always have to be on offer. Totally cool to say “not now, it’s only an hour ‘til dinner.” Or, “no, we are not having dessert tonight.” No need to mention healthy or unhealthy, good or bad. When it is on offer and they ask if they can have another, you can say, “well, that’s up to you. Why don’t you take a bite as see if it’s really what you want?”

Again, this is a deeply nuanced concept and will require far more than an article to master it.

The point here is to help you see there can be freedom and peace around sugar. Your kids are not addicted, but they could be responding to restriction (which can lead to I’m-eating-as-much-as-I-can-because-this-could-be-the-last-time-I’ll-be-allowed-eating — and can also lead to an eating disorder).

Many parents I’ve worked with have risen to the challenge  reinventing their rules around sugar, using the tools in the Raising Body Confident Kids parenting course. Their kids longer sneak food or sugar. They sometimes say no to dessert or leave cookies uneaten in their lunchbox.

I want you to have these tools too!

If you’re already enrolled in the course you can visit Module Three, Lesson Seven (how to handle dessert without power struggles) and Lesson Eight (how to deal with sugar + no more begging for sweets) to refresh yourself with the tools.

For those not enrolled, but ready to learn, you can find out about the Raising Body Confident Kids parenting course here.

It’s such a pleasure to support you on your parenting for body confidence journey!